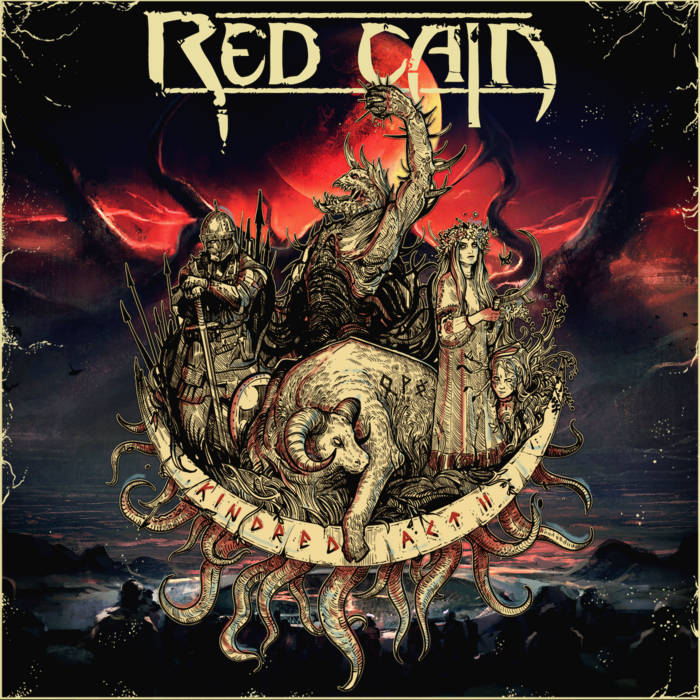 Experimental, aggressive, and recognizably Red Cain in its style, “Kindred: ACT II” picks up and expands on the events from our previous album, centralizing the story around the Aztec warrior Zalcoatl, ritually chosen to save his people, and trapped inside an alien pyramid to battle a hungry, unearthly Lovecraftian entity that plans to use him to be released into the world beyond its archaic prison. In his time-shifting travels within the iron ziggurat, Zalcoatl lives many lifetimes as demigods and human heroes, writing their stories on the fabric of human history, yet still striving to achieve his goal of leaving the pyramid and returning to his people.

But the cosmic horror of the alien Willow is deeply rooted in the human world and is raising occult forces to free itself, guided by a powerful, corrupt cult leader - espousing bloody violence and humanity’s greed for glory. It remains up to Zalcoatl, aided by his enigmatic companion Juliet, to decide whether to sacrifice his destiny and be the weapon that defeats the alien force attempting to engulf the world.

The two albums symbolize, respectively, the night and day side of this clash, with Act I focusing on Zalcoatl’s wanderings among the heroes of the “nightside”, such as Osiris in “ZERO”, his dalliance with the Morrigan as the Celtic warrior Cuchulainn in “Wing of the Crow”, and his short and tragic stint as rock musician Chad McFist in “Juliet” - and Act II championing the theme of the Sun illuminating all, with its shocking, often brutal, and yet life-giving brilliance.

Under this light, many things are revealed, and now Zalcoatl must face the final stage of his journey to the Sun, burn his enemies away, and bargain - or take up arms - to have it returned to his people. His primary alter ego in this saga is Kievan prince Mstislav in the Russian north, who, with his cohort of loyal varyags, is the only force standing between the Nameless Exarch and the morning that will never come.

Created and produced by Red Cain
Recorded, engineered, and mastered by Tyler Corbett, Alan Sacha Laskow (Kindred)
Written by Evgeniy Zayarny, Tyler Corbett
Drum writing and editing by Taylor Gibson
Additional guitars and songwriting by Brendan Doll (Kindred)
Additional vocals by Rogan McAndrews (Kindred)
Album artwork by Timur Khabirov, Evgeniy Zayarny, Piotr Jamroz
Album cover by Igor Zayarny
Special thanks to Veles, our patron, the god of War, Beasts, and Poetry
Another special thanks to Alberta Foundation for the Arts
And our sincerest gratitude to our families, friends, and fans!